In this tutorial you will learn how to deploy a PHP application to Kubernetes. The goal is to have a PHP container running inside a POD and accessible from outside the cluster.

Kubernetes has a couple gotchas that kinda make sense after you get used to it. Ones does not simply “deploy a container to k8s” and can then access it from outside. No, no. It is a bit more complicated than that. A container is “deployed” inside a POD, a POD is then then exposed using a SERVICE and a SERVICE is finally exposed to outside the cluster using an INGRESS.

This is what we will have in the end: 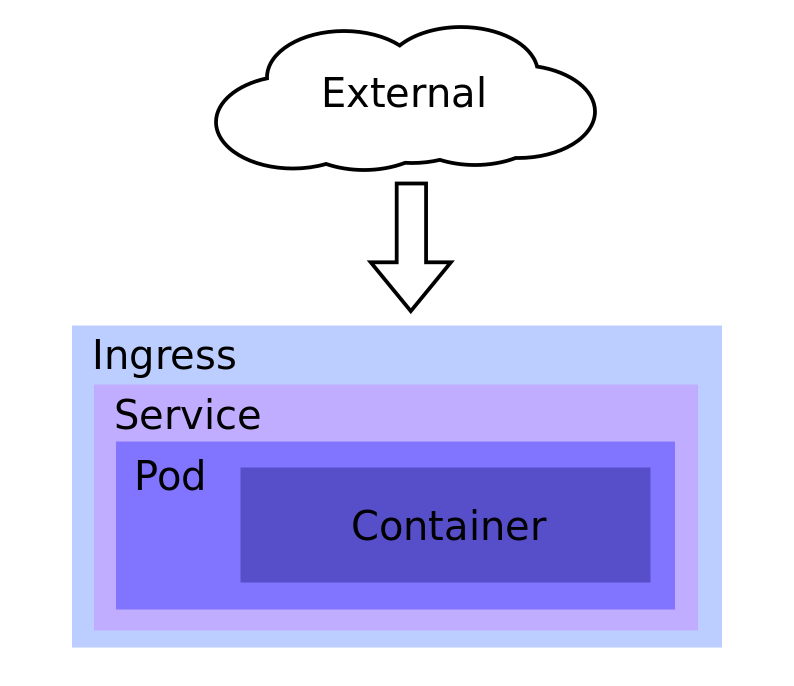 The “PHP App” is only one script that shows the current time on the container and the hostname, more information on the section Building the image below.

You can either build the docker image yourself or you can use the one I’m using from Dockerhub.

You can skip this part and head to Creating the Pod if you do not want to create the docker image. I do recommend creating the image, specially if you are not so familiar with Docker.

In order to push the created image to the image registry you will need an account on Dockerhub. So, go ahead and create one.

Now create a directory on your computer, I named mine php-app-pod, you can use the same name to make it easier to follow this tutorial. Inside this directory you will need another directory named app containing a PHP file named index.php with the following contents:

As you can see it is only a bit of information printed by this script, but this is enough to show us PHP is working. Later on it will also help us visualising a deployment is working properly on Kubernetes, but this is a topic for the next post on this series.

The Docker image will run Apache HTTP server and for that we need to set it up to run PHP. Save the configuration bellow on a file named host.conf in the php-app-pod directory:

And finally we need a file named Dockerfile with the following contents:

Now you can build the image using Docker:

You can use any name you want for the tag but it will be easier to tag it php-app-hostname to follow this tutorial.

After building the image you need to tag and push it to Dockerhub, be sure to log in to Dockerhub before pushing the image. Also, please replace infog with your username on Dockerhub.

You can test the image running the following command:

Again, replace infog with your username on Dockerhub. You should be able to see the following output on your browser when you access localhost:8080:

Now we are all se to create the Pod on Kubernetes.

Now it is time to focus on Kubernetes. If you skipped building the image on the section above you can use the same image I’m using, otherwise please replace infog with your username on Dockerhub.

In this tutorial I’m assuming you already have Minikube (or other local or remote Kubernetes cluster) and kubectl.

Minikube is a simple way to have a local Kubernetes cluster. Need help installing it? I wrote a step by step that you can follow.

kubectl is the command line cliente for Kubernetes. I also wrote a step by step to set it up.

As you can see on the image above a Pod is what will contain the running container. We are creating all the needed objects starting from the inner layer, the image to run the container, to the outer layer that will be Ingress.

A Pod is one of the smallest objects on Kubernetes. A pod will usually run a container or more containers and will expose some kind of service, like the Apache HTTP server for our PHP application.

Kubernetes has a declarative interface that lets us create workloads that will create objects like Pods. It is possible to use both yaml and json to declare new workloads. Personally I believe json is easier to read and follow then yaml but the Kubernetes community decided to use yaml. Some may even joke Kubernetes professionals are yaml developers ;-)

Anyway, I will use json for the examples on this post because I believe it is more readable, I will show some yaml examples too.

Here is the json to declare a workload to create a pod using the image we created:

It seems like a lot, but we can break it down to single lines to make it easier to understand.

Save the contents of the json above on a file names pod.json. You can save this file anywhere on your computer, but I do recommend keeping it inside the php-app-pod directory we are working on so far.

Now it is time to use kubectl to command Kubernetes to create the Pod. To achieve this run the following command:

The output should be the following:

You can even see the status of the Pod using the command get pods:

After some point you should see the status as Running:

Nice, the pod is up and running. The next step is creating a Service to expose this Pod.

The next layer we need to create is the Service. A service exposes a Pod and is necessary to make it available.

A Service is necessary because Pods are not persistent and can be replaced at any time when there is a problem. If a Pod misbehaves Kuberenetes will simply remove it and create a new one (When using deployments, we will get the on the next post). The Service will keep track of that and can even serve as a balancer to send traffic to the Pods.

Just like the Pod, the Service is also created using a declarative interface. This is the json used to create a service:

Let’s check what are the options all about:

To create the service save the contents of the json above into a file named service.json and run the following command:

You can check the services using:

And there is our service! It accepts connections on port 8085 on IP 10.106.139.165. This IP is internal to the cluster, so we still cannot access the application from outside. This will be done on the next step using Ingress.

Ingress is the object that will route the external traffic into the cluster. It is also the outer layer on our chart!

Just like the Pod and the Service, creating an Ingress can be done using a json or yaml file. Here is the example to create an Ingress object:

Save the json above in a file named ingress.json and run kubectl to create the workload that will create the ingress object:

Then you can check the ingress objects:

We can now finally access the running application from outside the cluster! Ok, but how? This is done using the cluster’s IP and since we using minikube the way to find out the IP is running the following command:

Now edit the hosts file /etc/hosts to add an entry for the domain used on the Ingress setup:

Now access php-app-pod.local on your browser and you should see the text from the running PHP application on the pod:

And there you have it: A PHP application deployed to a Kubernetes cluster.

Kubernetes can be complicated to learn and understand, mainly to understand, but when we break the parts into smaller parts and try to understand how everything is linked together, we have a better chance. Next is a summary of what we did:

It seems like a lot of work only to have an application running and having no real benefit over, let’s say, a more traditional deployment on a private server or a shared one.

This step is important to understand Kubernetes’ concepts. On the next post I will cover how to use a deployment to have several copies of the Pod and to even scale the infrastructure up and down when needed, stay tuned.